Prodrive Technologies has developed a sensor that can measure dust particles in and around a car. With this data, car manufacturers can improve the air quality in the vehicle. Production is already in full swing.

The driving experience is of paramount importance to car manufacturers, especially those in the upper echelon. With beautiful lighting and first-class audio systems, they hope to trump the interior of the competition and convince potential buyers. Relatively new is the option to monitor and regulate the air quality inside the cabin. After all, if the truck in front of you suddenly accelerates, it’s very nice if the ventilation system switches quickly and automatically to internal circulation.

To achieve that, sensors are needed that can quickly and accurately measure the particulate matter in the air, both inside and outside the car. Prodrive Technologies has risen to that challenge and recently started volume production of its PM2.5 sensor for several German car brands. It’s not yet known when Dutch car buyers can select the air quality sensor as an option, but it will not be long.

Although Prodrive Technologies has developed the PM2.5 sensor for the automotive industry, the company also sees applications in other sectors. To start with, it’s possible to share the measurement data of all cars via the cloud with, for example, the Royal Netherlands Meteorological Institute KNMI, which thus obtains a much more detailed picture of the air quality. At the moment, it still uses a limited number of measuring stations that are full of expensive lab equipment. The Prodrive sensor is a consumer product with a corresponding price. And perfectly suitable for making such grid measurements.

“We’ve done test drives with both our sensor and the lab systems on board,” explains system architect Bas van der Oest, “Showing that we’re in the same accuracy range.” Prodrive achieved the same result in tests with weather stations. “Our signal contains slightly more noise, but that’s also because we sample much faster. Our sensor provides a new measurement value every second, compared to once a minute or even less frequently with the lab equipment in a weather station. A lower frequency, of course, makes it easier to achieve a better signal-to-noise ratio.”

What the PM2.5 sensor does in cars, it can also do in other places where high air quality is a great asset. Think of the ventilation and air conditioning systems in hospitals.

“We were given a few challenging requirements from the market,” says Eric Janssen, program manager vision and sensing at the Brabant-based company. “Obviously, the sensor should be as cheap as possible, so we paid a lot of attention to the industrialization and the manufacturability of the system. Furthermore, car manufacturers have chosen to mount the sensor in a hard-to-reach place under the dashboard. So our assignment was to design a part that never needs maintenance. So, not like oil, lights or filters for which car owners accept regular replacement. Our sensor should last eight thousand hours, more or less the total driving time of the car during its entire life. Together with the measurement speed and accuracy, these were the most important starting points in the design process.”

The air quality sensor from Prodrive has two channels, one for the indoor air and one for the outdoor air. They’re two separate systems, housed in one component because they can then both use the same complex laser module, among other things.

Both airflows are split up with a so-called virtual impactor, a ‘sidetrack’ capturing part of the flow. The configuration of such a virtual impactor determines which particle size it filters from the main flow. Prodrive is interested in particulate matter smaller than 2.5 micrometers. That’s what it designed the impactor for. “It’s a complicated part,” says Prodrive system architect Bas van der Oest. “Especially because there are so many variables involved. We simulated and tested extensively to arrive at the best geometry.”

In this sidetrack, Prodrive has opted for an optical measuring principle. That’s far from obvious considering the continuous stream of dirty air passing through. Janssen: “For starters, we make sure that the flow never comes into contact with the optical elements. Through simulation and by literally driving miles, you will at some point know exactly how to do that. This construction makes our system very powerful.” Janssen doesn’t want to elaborate on how the engineers at Prodrive exactly solved it.

Van der Oest adds: “We opted for optics because of the cost and speed. In a lab setup, you can use filters to capture the dust particles and weigh exactly how much material it is. Then you have the absolute truth, but you have to sample for a long time because otherwise, the measurement is too inaccurate. With our optical system, you get an immediate answer, within a second.”

Janssen again: “There are alternative measuring methods, but they often contain a consumable – a propellant or a filter. We decided against those because of the maintenance requirements.”

The air quality sensor from Prodrive Technologies will soon be available as an option with several German car brands.

The actual measurement is based on the principle of Mie scattering. “How light scatters on dust depends on the size of the particles and the wavelength used,” says Johan Bosman, optics specialist at Prodrive Technologies. “So we’ve selected a wavelength that matches the particle size we’re interested in. But even at that wavelength, only a very small amount of light is scattered; by far the most light goes straight ahead. To give you an idea: with the laser, we shoot milliwatts at the dust flow, but the scattered signal is in the order of picowatts. Our detector is a real photon counter.”

In addition, the scatter pattern is dependent on the angle and most of the scattered light is only deflected a little bit. “However, we can’t position the detector too close to the main beam,” Bosman points out. “The diffracted light is dwarfed by the laser beam. So we had to find a balance between as much scattered light as possible and as little impact as possible from the main beam.”

Because the smallest disturbance already overpowers the measurement, Prodrive had to consciously consider every detail to achieve a good signal-to-noise ratio. “We spent a lot of time creating a well-defined, collimated laser beam,” explains Bosman. “We also capture all so-called ghost rays – uncontrolled reflections that are difficult to simulate. At all-optical transitions, a little light always bounces back. You can suppress this somewhat with coatings, but there’s always a slight permillage left. In many measuring systems, this isn’t too bad, but with our photon counter, any ghost ray can have a disastrous effect.” 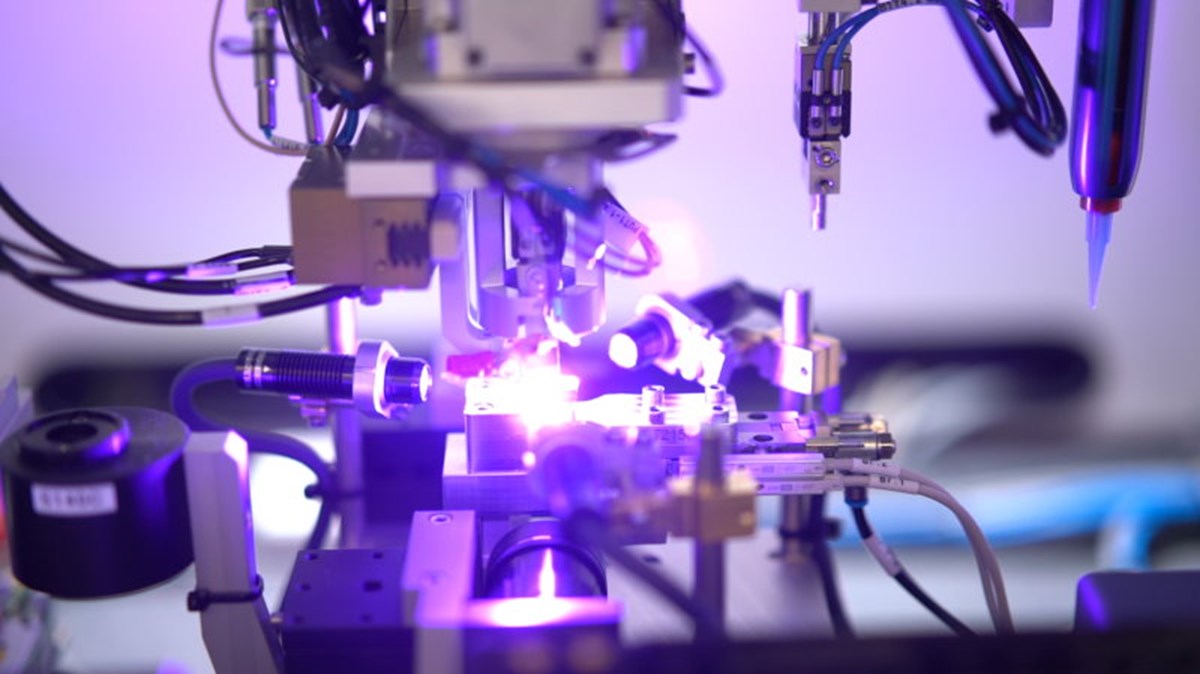 For cost reasons, the sensor is contained in a plastic housing. This set the bar very high for the laser alignment.

The most crucial part of the sensor is the laser module. For cost reasons, Prodrive has chosen to put the entire sensor unit in a plastic housing. When it gets hot, that material expands, but that isn’t allowed to affect the measurement. Van der Oest: “We know quite well which tolerances we can achieve with our molds and injection molding machines. We then calculated what that means for the laser alignment requirements.” These turned out to be quite high. Prodrive has therefore set up a separate production cell where it can accurately assemble the laser modules with a precision robot and immediately check whether the alignment is correct.

Bosman adds: “Because we spent so much time on the accuracy of that laser bushing, we have more leeway later in the process. We can do that with relatively cheap injection molded parts. After all, it’s a matter of allocating your tolerance budget.”

Janssen: “We regularly design and produce optical components, for example for the medical industry. There, you have the freedom to choose more expensive materials and to use more complex manufacturing processes. For this sensor, we had to deal with very different requirements. That makes this project special for us.” 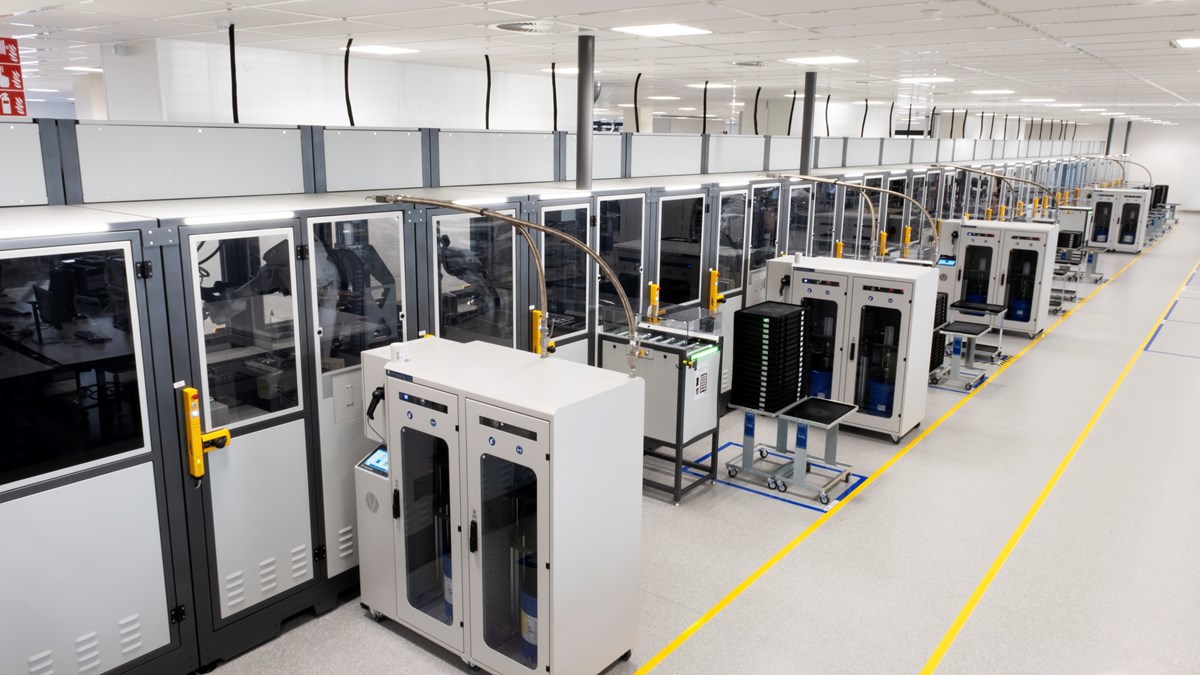 Prodrive has set up a fully automatic production cell for the PM2.5 sensor.

To check whether the design was satisfactory, Prodrive tested the PM2.5 sensor extensively. “In the automotive world, customers know very well how they want systems to be tested. Think of vibrations, temperature shocks and lifespan at high humidity,” notes Van der Oest. The sensor must withstand the freezing cold of Siberia and the sweltering desert of Saudi Arabia. Prodrive has tested its air quality sensor in all those environments.

“In an accelerated lifetime test, we pumped air with a pollution of five milligrams per cubic meter through the sensor,” describes Van der Oest. “With this, we’ve shown in six weeks that the system continues to function excellently, even if the car were to drive the full eight thousand hours in, for example, New Delhi.”